The World Soccer Challenge was a competition that took place in 2009 by invitation and the teams were Chelsea of England, America of Mexico, Internazionale of Milan, and A.C. Milan. In a league system Chelsea won their three games and were champions. The 2011 tournament featured Spain`s Barcelona, invited by virtue of their being European Cup winners. Spain`s Real Madrid were champions by virtue of their winning their three games. Although Manchester United won their three games also. Against New England Revolution left winger, Ashley Young, signed from Aston Villa, made his debut.  United won, 4-1. In the 51st minute half-time substitute, former Liverpool and England centre forward, Michael Owen, kept his cool to slot into the far corner when confronted by onrushing Revolution `keeper Shuttleworth. Another of manager Alex Ferguson's second-half substitutes, Italian forward Federico Macheda, who`d begun with Lazio but signed for United at 16, made it 2-0 (54) after Owen's opener, and with an equally composed finish. Macheda added a third on 61 minutes; lashing a shot into the far corner of the New England net after right full back Rafael's cross had eluded a crowd of players inside the penalty area. On 80 minutes French winger, Gabriel Obertan, bought for £3m from Bordeaux in July 2009, South Korean midfield dynamo, Ji-sung Park, bought from PSV Eindhoven for £4m in July 2005, and Welsh left winger, Ryan Giggs, a product of United`s youth policy, who debuted on March 2, 1991, as a sub for injured full back, Denis Irwin, against Everton at Old Trafford, combined superbly inside the penalty area to play in Park, who clipped an audacious finish over Shuttleworth.

New signings, `keeper David de Gea brought from Atlético Madrid (£17.8 m), and defender, Phil Jones, brought from Blackburn Rovers (£16.5 m), debuted against Chicago Fire as United won, 3-1. England centre forward, Wayne Rooney (66), who latched onto a pinpoint long ball from United central defender, Rio Ferdinand, and lifted the ball over the onrushing Chicago `keeper, Conway. With 15 minutes remaining of the second half, combining down the right flank with Portuguese right winger, Nani, Brazilian right back, Rafael shimmied along the by-line and coolly squeezed the ball through Conway's legs (75). To wrap things up, Nani made the Fire look foolish in defence when cheekily dinking the ball into the net (82). United won their last and third game against Spain`s FC Barcelona, 2-1, with a goal from Nani (22) after the Catalan side committed forward and the Reds cleared the set-piece to break quickly down the pitch. England forward, Danny Welbeck, slipped a pass between two Barcelona defenders for Nani to chase and, collecting the ball, the Portuguese right winger kept his cool to steer it through the gap between Barca `keeper Victor Valdes' legs. United`s second came through Michael Owen (76) when England`s Tom Cleverley collected a stray pass and put the striker in through the middle where, in his favored one-on-one scenario, Owen dinked the ball over onrushing Barca `keeper Valdes. Madrid were crowned International Champions Cup winners by virtue of their scoring more goals. 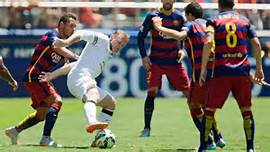 The 2012 tournament featured Chelsea, invited by virtue of their being European Cup winners, and again Real Madrid were the only team to win all their games. In 2013 the World Soccer Challenge was rebranded the International Champions Cup. By virtue of their winning two games, 3-1 against Los Angeles Galaxy, and 2-1 against Everton, Real Madrid progressed to a Final with Chelsea, who also progressed by virtue of their winning two games, 2-0 against Internazionale and 2-0 against A.C. Milan. Real Madrid beat Chelsea in the Final of the International Champions Cup, 3-1. In 2014 Manchester United progressed to the Final by virtue of winning their three group games. Against Roma of Italy, 3-2, Rooney latched onto Mata’s pass on the edge of the ‘D’ and arced a wonderful shot into the top-left corner (36). Three minutes later Rooney provided a superb ball over the top from the halfway line, which Spanish midfielder, Juan Mata, brought down expertly before lobbing `keeper De Sanctis (39). Just before the break, England defender Phil Jones ran forward and played the ball to Spanish midfielder, Ander Herrera, transferred in June 2014 from Athletic Bilbao (€36 m), whose first-time lay-off into England striker Danny Welbeck’s path resulted in the forward being felled by Urby Emanuelson inside the box. Rooney stepped up to take the spot kick and sent De Sanctis the wrong way for the goal (45 + 1). Internazionale of Milan were then beaten, 5-3 on penalties after a 0-0 draw, with spot kick successes for England winger, Ashley Young, Mexican forward signed from Chivas on July 1, 2010, Javier Hernández, England midfielder, Tom Cleverley, Scots` midfielder and sometimes captain, Darren Fletcher, and Japan`s midfield star, Shinji Kagawa, bought from Borussia Dortmund for £13 m in 2012. Real Madrid were beaten, 3-1, with goals from Manchester United left winger, Ashley Young (20, 37). His first came after a one-two between Scots` midfielder, Darren Fletcher and Rooney on the edge of the box. Fletcher slipped a pass to Welbeck, who found Young on the far left of the box, and he steered a shot inside `keeper Casillas' near post. On 37 minutes Young collected possession on the left and curled a cross towards Rooney which was just too high for the striker but the ball crept in at the far post. Mexican forward, Javier `Chicharito` Hernández, `little pea`, converted a header from Kagawa's cross on 80 minutes. In the International Champions Cup Final United faced Liverpool, who progressed by virtue of the three group games they`d played against Olympiacos of Greece, 1-0, Manchester City, 2-2 (3-1 on penalties) and A.C. Milan, 2-0. Manchester United beat Liverpool in the Final of the International Champions Cup, 3-1, with a goal from a volley back across the goal and into the far right corner of the net by Wayne Rooney (55) after a deep cross past the far post from Hernández on the right and behind the forward players, a deflected left-footed shot from 12 yards by Juan Mata (57) after Shaw found him with an infield pass from his left foot out on the left wing, and England left winger, Jessie Lingard (88) who, after Shinji Kagawa half-controlled a right wing cross into the centre from Ashley Young, pounced to unleash an unstoppable right-footed drive from 15 yards out, and that after Liverpool`s midfield captain, Steven Gerrard, had opened the scoring with a 14th minute penalty. 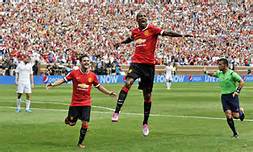 In 2015 the tournament featured an International Champions Cup of Australia, China, and America. Real Madrid were champions of Australia by virtue of their becoming winners of the group. Despite losing 6-7 to Roma on penalties after a 0-0 draw, they beat Manchester City, 4-1, while City drew 2-2 with Roma, who won on penalties, 5-4, so Madrid were champions by virtue of their being the only clear winner. Real Madrid were champions of China by virtue of their beating Internazionale, 3-0, and drawing, 0-0 with A.C. Milan, who beat Inter Milan, 1-0, and so Madrid were champions by virtue of their scoring more goals. Paris Saint Germain became 2015 International Champions Cup winners of America by virtue of their scoring more goals than New York Red Bulls, after they amassed 10 league points in their four games against Benfica of Portugal, 3-2, Fiorentina of Italy, 4-2, Chelsea, 1-1 (5-6 on penalties), and Manchester United, 2-0, who were defeated on that basis. If United had beaten PSG they`d have been International Champions Cup winners after inflicting defeat on América Mexico, 0-1, with a goal on his debut for France`s defensive midfielder, Morgan Schneiderlin, bought by United manager, Louis Van Gaal, for £1.2 m from Southampton, and who rose at the far post to float a header from Juan Mata's cross beyond Hugo Gonzalez in the Club América goal. Following that success United had beaten United States` San Jose Earthquakes, 3-1, with goals from Juan Mata (32) after a run down the left from winger, Ashley Young, followed by a cross. Dutch forward Memphis Depay (37), with his first goal for the club, latched onto a loose back pass from Jean Baptiste Pierazzi to score, before Brazilian U-20 International, Andreas Pereira (61), also with his first goal for the club, headed home from England winger Jessie Lingard`s cross. United then beat Spain`s Barcelona, 3-1, through a headed goal from Wayne Rooney at the centre of the penalty area from a corner on the left by Ashley Young (8), a right-footed strike by England winger, Jessie Lingard (65), who converted a low cross into the six yard box by defender, Tyler Blackett, from his left boot, and a strike from Belgian midfielder, Adnan Januzaj (90+1) who, turning back and away from the Barca goal to collect a pass falling behind him with his right foot, turned to his right and, controlling the ball, resumed his run on goal. Surging on through the Barca defence Januzaj drove the ball left-footed low and into the net, but it wasn`t enough goals scored and PSG were Intercontinental Champions Cup winners. 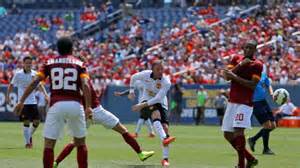 In 2016 the tournament featured an International Champions Cup of Australia, China, and America. Borussia Dortmund of Germany beat Manchester United, 4-1, with new manager Jose Mourinho`s first major signing as United boss, Dortmund`s right winger, and captain of Armenia, Henrik Mkhitaryan, scoring the United goal after England`s teenage sensation goalscorer, Marcus Rashford, on for winger Memphis Depay in the 45th minute, dummied for Spain`s Juan Mata to lay the ball off for Mkhitaryan to shoot from the centre of the goal in the 59th minute, 1-3. The China group game between United and Manchester City was cancelled due to bad weather, so despite City beating Borussia, 6-5 on penalties after a 1-1 draw, a champion was neither discernible nor declared. Juventus of Italy became International Champions Cup winners of Australia, despite losing to Melbourne Victory of Australia, 3-4, after a 1-1 draw, because of a 2-1 defeat of Spurs. Paris Saint Germain (PSG) became International Cup Champions of America after winning their three group games, 3-1 against Inter Milan, 3-1 against Real Madrid, and 4-0 against Leicester City. 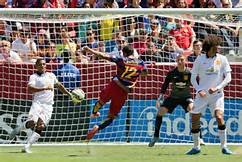 What isn`t evident is the legitimacy of teams being declared champions of continents when they don`t have clubs and stadiums there. In 2015 Spain`s Real Madrid participated in separate International Champions` Cup tournaments, and were declared champions of Australia and China, although their club stadium is the Santiago Bernabéu in Madrid, which suggests that the organizers of the ICC have hubris. Australia and China fans might find it presumptuous of Spanish team, Real Madrid, to accept the title of Champions of Australia and China, where it might be legitimate to suppose that the champions there are Australia and China. In the International Champions Cup of China there weren`t Chinese teams, and in the International Champions Cup of Australia, Melbourne Victory`s defeat of Juvé, 4-3 on penalties after a 1-1 draw, was the only championship sign of a national Australian defence in a competition awarded in 2015 to Real Madrid in the absence of a team from Australia participating, and to Juventus in 2016 despite the Italian`s being beaten by Melbourne Victory, who were allowed to play only a single game in accordance with the rules of the competition, whereas Juventus played a second game against Spurs and won, 2-1. 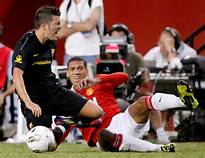 Though Manchester United participated in the International Champions Cup of China, as English F.A. Cup winners in 2016, 2-1, against Crystal Palace, it isn`t a qualifying round from an Australasian perspective. Whereas it`s logical to suppose that the European Champions might participate in a tournament in the United States of America, with the International Champions Cup as a prize, it isn`t sensible to suppose that a team that`d won a national cup competition in Europe should be invited to contest a continental trophy without the participation of the local clubs there. United made attempts to be welcomed in China and Australia with pre-season touring, and the bringing into the squad Asian talent such as South Korea`s industrious midfielder, Ji-sung Park, in July 2005 from Dutch club PSV Eindhoven, and Japan`s energetic midfield star, Shinji Kagawa, from Borussia Dortmund in 2012, but the ICC organizers proclaimed Real Madrid and Juventus conquerors without a welcome to face.

Red Of Heaven 0036705182849 dularobin@gmail.com
© 2013 All rights reserved.
Create a free websiteWebnode
Webnode, an innovative sitebuilder
Have a captivating website for free!
Get started