Homepage > Praying For A Goal For 10 Years

Praying For A Goal For 10 Years

Praying For A Goal For 10 Years

Manchester United have had problems with young goalscorers for almost a decade now. The ancient phenomenon of the nurtured young talented forward that didn’t quite make it had been lost to Old Trafford since the departure of Mark Robins who had been credited with rescuing United’s ultimately successful F.A. Cup campaign in the 1989-90 season when he scored in the 114th minute of extra time in the semi-final to take the club through against Oldham Athletic, 2-1. However, it began at Old Trafford again with Danny Welbeck in the final days of manager Alex Ferguson’s reign. Welbeck won a League Cup Final winners’ medal with United, while making just 1 league appearance and 2 as substitute for 1 goal in 2008-09. The team beat Spurs on penalties, 4-1, and Danny started at center forward. Although United won the League Cup again the following 2009-10 season and Danny made 1 start and 4 appearances as substitute for the reds that season, he wasn’t a part of the squad that beat Aston Villa, 2-1. However, he was center forward against Everton in the F.A. Cup semi-final that United lost, 2-4 on penalties after a goalless 0-0 draw, which went some way to explaining his omission from the team that lost 0-2 to Barcelona in the European Cup Final that 2008-09 season, although Paul Scholes’ absence from the selected line-up raised more eyebrows as the midfielder was described by the Spanish giants as 'most feared' subsequent to his 14th minute long range semi-final winner in the 2007-08 season at Old Trafford, 1-0, after the first leg at the Camp Nou in Spain had been a 0-0 draw. The Manchester club had gone on to defeat Chelsea, 6-5 on penalties, when the game had finished, 1-1, and extra time had been played. 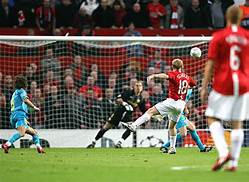 The 'Red Devils' won the league title in 2010-11 and Danny didn’t play in any league games  for United, because he was on loan at Sunderland where he made 21 starts and 5 appearances as sub for a return of 6 goals, while top United scorer,  Bulgarian Dimitar Berbatov with 20 goals from 24 league starts and 8 substitute appearances, was mysteriously totally excluded from the 1-3 European Cup Final defeat to Barcelona, along with Paul Scholes, who was again a substitute, and who’d made 16 starts with 6 substitute appearances during the successful championship campaign in what looked like the tail end of a career that would come to haunt Ferguson. Berbatov had arrived on September 1, 2008, to bar Welbeck’s way into the team. Scoring 9 goals in that 2008-09 season in which United went on to win the title, Berbatov scored 12 league goals the following 2009-10 season but, like Scholes, he wasn’t in the starting line-up for the 1-3 defeat to Barcelona in the 2010-11 European Cup Final. When Welbeck finally got his chance, in 2011-12 the club finished level on points with Manchester City, who won the league on 89 points, but with a better goal difference of +64 to +56. Danny made 23 starts and 7 as substitute for 9 goals, while Berbatov made 5 starts and 7 substitute appearances for 7 goals and was transferred to Fulham for the 2012-13 season, which tended to suggest that, although youth had won out, Berbatov’s goals might have made a difference if he’d played more that term. 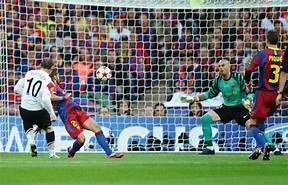 Ferguson’s solution to the lack of striking power was to bring Robin Van Persie from Arsenal, who scored 26 league goals in 35 starts and 3 substitute appearances as the team won the title again that season, while Danny Welbeck scored but 1 goal in 13 appearances and 14 as substitute. Although Ferguson retired at season’s end, Danny found his striking boots again in 2013-14 for new manager from Everton, David Moyes, with 9 goals in 15 starts and 10 as substitute. However, United’s failure to win anything, and a dismal home exit to Sunderland on penalties, 1-2, with Welbeck blazing his shot over the bar to the right, so missing United’s first after Sunderland’s central midfielder, Craig Gardner, had blazed his own shot over the bar to the left in extra time of the second leg of the semi-final of the League Cup on January 22nd 2014, saw Moyes’ dismissal, and Welbeck’s moving to Arsenal on September 2, 2014, as United’s initial flirtation with forward youth came to a sad conclusion, which was that infatuation with young looks was an assassin’s bullet to a soccer manager. Although Sunderland striker, Steven Fletcher, also missed his spot kick, when United’s Spanish  ’keeper David De Gea, diving to his right, saved his low shot by the post, and so United’s Scots’ midfielder Darren Fletcher duly made it 1-0 to United with a shot high and to the right of S’land ’keeper, Italian Vito Mannone, Belgian play maker, Adnan Januzaj, Brazilian right back, Rafael da Silva, and England center back, Phil Jones, all failed to find the back of the net for ’The Red Devils’. S’land ran out winners, 2-1, and new Dutch manager, Louis Van Gaal, arrived.

Although Van Gaal’s United squad didn’t win any major trophies, a pre-season success against Liverpool, 3-1, in the Final of an annual invitation tournament, the International Champions Cup, which was played for in the United States of America between the world’s best, helped to restore some faith in the club for the 2014-15 season. Van Gaal’s remaining at the helm saw United win the F.A. Cup, 2-1, against Crystal Palace at the close of the 2015-16 season with England winger, Jessie Lingard, who’d made just 1 appearance in Van Gaal’s first season in charge, coming on as a 90th minute substitute for Spanish inside forward, Juan Mata, scoring the winning volleyed goal from outside the area in the 110th minute of extra time, and after 19 starts and 6 substitute appearances in the league for 4 goals, so suggesting that United’s faith in youth would experience a resurgence under Gaal’s stewardship. 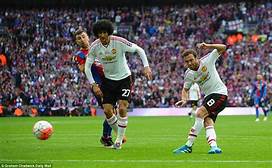 Marcus Rashford started at center forward in that 2-1 win over Crystal Palace, and after scoring twice on his debut against Arsenal at 'the Theater of Dreams' on February 28, 2016, aged 17, before finishing  with 11 starts and 5 goals in the league campaign. Rashford would prove to be the successor to Welbeck in terms of United’s misplaced faith in young center forwards, and he was replaced on 72 minutes by winger, Ashley Young, before Palace opened the scoring with a 78th minute left footed strike from substitute midfielder, Jason Puncheon, which Juan Mata replied to almost before the game had been restarted on 81 minutes when a cross from the right from Wayne Rooney, chested down by Moyes’ midfield buy from Everton, Belgium’s Marouane Fellaini, saw the Spaniard drive it into the net from ten yards out. However, it wasn’t success enough for the board and Gaal was replaced for the 2016-17 season by José Mourinho, whose reputation was immense having won 3 league titles with Chelsea (2004-05, 2005-06, and 2014-15); as well as the European Cup with Porto (2003-04), and Internazionale of Milan (2009-10), and much more besides: including the Spanish championship (2011-12) after a spell with Spain’s Real Madrid. 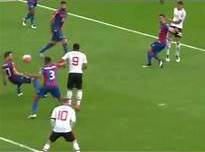 Mourinho’s reign as United boss was characterized by greatness, although no sooner had success been achieved than the Portuguese seemed intent on dismantling a successful team. Rashford finished his second season with 16 starts and 16 substitute appearances for 5 league goals, and although  subsequent injury to Sweden’s Zlatan Ibrahimović, who’d come from Paris Saint-Germain on a free transfer and scored twice in United’s defeat of Southampton in the 2016-17 League Cup Final, 3-2, saw Rashford start the Europa Cup Final against Ajax of Amsterdam, he didn’t make an appearance in the EFL Cup Final until the 77th minute after the scoring had been completed through Ibrahimović’s 87th minute headed goal. Ajax were beaten, 2-0, with an 18th minute deflected long range shot from French midfielder, Paul Pogba, who Mourinho had had return to Old Trafford from Italian giants Juventus, and a 48th minute overhead kick from Armenian right winger, Henrikh Mikhitaryan, who had been brought to Old Trafford from Germany’s Borussia Dortmund. These buys, along with Eric Bailly, an Ivory Coast center back from Spain’s Villareal, were the mainstay of Mourinho’s initial success, and although Ibrahimović’s cruciate ligament injury put a stop to his performing better than the 17 goals in 27 starts and 1 substitute’s appearance, Wayne Rooney, who scored 4 league goals that season from 15 starts and 10 substitute appearances, could have been switched back to the striker’s role that had seen him become the club’s highest goal scorer ever since his arrival from Everton for the 2004-05 season’s campaign. 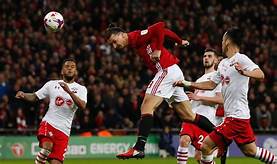 In 2017-18, Manchester United finished on 81 points, and were runners up in the league to Manchester City on 100, a margin of difference of 19 points, which silently spoke volumes about the gap in footballing class. Although United reached the F.A. Cup Final, the team lost to Chelsea through a 22nd minute Eden Hazard penalty awarded after a sliding tackle by England center half, Phil Jones, went awry. Both Rashford and Lingard were taken off in the 73rd minute to be replaced by French striker Anthony Martial, who was on 9 goals for the season and who’d top scored in the league in 2015-16 for Van Gaal with 11 goals as United won the F.A. Cup that season, and Romelu Lukaku, who'd arrived from Everton for £ 90 m as a replacement for 'Ibra' on July 10, 2017, and had scored 16 league goals that 2017-18 season, but neither had been selected for the Final. Rashford, with 7 goals from 17 starts and 18 substitute appearances in the league, and Jessie Lingard with 8 from 20 starts and 13 appearances as 'sub', were preferred. Bailly had also been on the substitutes’ bench for the Final, and on 22 January, 2018, Mkhitaryran was transferred to Arsenal as part of a swap deal for Alexis Sánchez, a Chilean forward, who admittedly had had what looked like a perfectly good goal ruled out for offside during the 2018 Final. However, with only 2 goals that season from 12 starts, and 1 from 9 starts and 11 as substitute the following 2018-19 season, the exchange looked to have left United the poorer. 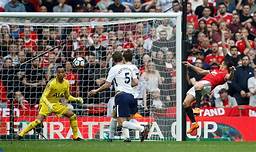 Ibrahimović made only 1 start and 4 as substitute before Mourinho let him leave for L.A. Galaxy, where he subsequently blossomed after what had seemed a career-threatening cruciate ligament knee injury, scoring 22 goals in 27 starts in the 2017-18 season. Wayne Rooney had already been moved back to Everton for the 2017-18 season, where he scored 10 goals in 27 starts and 4 substitute appearances. Consequently, Mourinho’s decision to leave on the bench in favor of Rashford and Sánchez, Martial and Romelu Lukaku, the Belgian center forward, brought from Everton after Rooney’s return a day earlier on July 9, 2017, and who’d make 33 starts and 1 substitute appearance that league season, looked ill considered. Martial had finished with 9 from 18 starts and 11 as substitute, while both Rashford and Lingard were behind him in terms of goals, and ahead in terms of appearances. The following season 2018-19 saw Rashford make 10 goals, 2 less than Lukaku, who top scored with 12, but Rashford’s then highest score of 10 in three seasons was still 1 less than Martial’s 2015-16 total of 11 when he top scored as a savior for United who that season also won the F.A. Cup Final, 2-1, against Crystal Palace, and Martial completed his own 2018-19 season’s tally of 10 goals on March 30, 2019, with the winning 72nd minute strike at home to Watford, 2-1, and from only 18 starts and 9 appearances as ’sub’, compared to Rashford’s 26 starts and 7 as substitute. Consequently, it wasn’t entirely surprising that United sacked the manager and replaced him with the player that had scored the winning goal against Bayern Munich in the 1999 European Cup Final, Ole Gunnar Solskjaer, although seven defeats in all competitions and only a single win meant that United finished without silverware amid a feeling that Mourinho, who’d been higher placed in the league before Solskjaer’s arrival, and had still been in contention for the F.A. Cup at the 4th round stage, while in the last 16 of the European Cup, might have done better than to finish 6th in the league; if only he hadn’t relied on rash youth.