Sir Alex Ferguson introduced the squad rotation system at Manchester United during his tenure as manager based on money for expensive transfer fees paid for players coming in from other clubs, along with the promotion of more inexpensive junior talent, which afforded the team the opportunity of having a large pool of good players to achieve success on the pitch at `the Theater of Dreams`. From the Academy and on to the field of play at the Old Trafford stadium, where they plied their honed skills, `Fergie`s Fledglings` were left winger, Ryan Giggs, right winger, David Beckham, midfield dynamo, Paul Scholes, the industrious utility player, Nicky Butt, and full backs Gary and Phil Neville who, along with transferred talent, would eventually win the European Cup against Bayern Munich, 1-2, in Spain at F.C. Barcelona`s Camp Nou stadium, and after goals from center forward, Teddy Sheringham, bought from Spurs for £3.5 million at the start of the 1997-8 season, and Ole Gunnar Solskjaer, who`d arrived from Norwegian`s Molde for £1.5 at the start of 1996-7. The goals in the 91st and 93rd minutes surprised a German team that had led since the 6th minute through a low free kick from forward, Mario Basler, which was awarded after United center back, Ronny Johnsen, brought down Carsten Jancker. With his right foot Basler bent the ball around the United wall from just outside the penalty area, and into the net beyond Danish `keeper Peter Schmeichel. 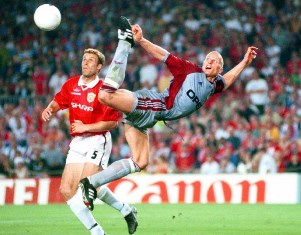 The Germans led until United`s despair ended in a late attacking flourish of the never say die footballing style for which they are justifiably famed. United had a corner, and with little time left `keeper Schmeichel, who`d scored in similar circumstances, ventured up to Bayern's penalty area. Beckham flighted the corner in just over Schmeichel's head, and center forward, Dwight Yorke, 18 goals in the league that season, put the ball back towards the crowded area. Bayern substitute midfielder, Thorsten Fink, had been brought on by Bayern manager, Ottmar Hitzfeld, who`d receive much criticism for it, because Fink replaced sweeper Lothar Matthäus, 37 years of age, and Hitzfeld clearly felt he was a tired risk by the 80th minute, but Fink failed to clear a ball that probably wouldn`t ever have troubled Matthäus, and the ball arrived at the feet of Ryan Giggs, whose shot fortuitously found Sheringham, who latched onto it gleefully to swipe it into the bottom corner of the net with his right boot. Neither Sheringham nor Solskjaer were chosen to start against Bayern, and as Sheringham was on for left winger, Jesper Blomqvist, in the 67th minute, Solskjaer, who`d scored 12 league goals that season, replaced center forward, Andy Cole (17), in the 81st minute almost immediately after Lothar Matthäus left the fray. 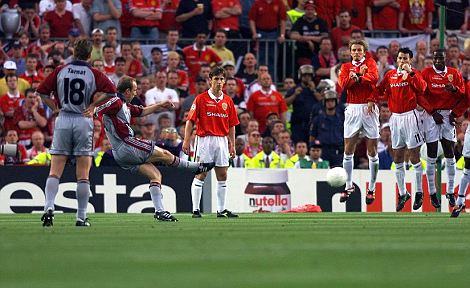 Sheringham had scored only twice in the league, but had redeemed himself by scoring with a low drive under Newcastle `keeper Steve Harper after a through ball from Scholes, in the F.A. Cup Final, which United won, 2-0, and so Sheringham had been picked to be amongst the substitutes. Within 30 seconds of the restart after Sheringham`s substitute`s strike, another Beckham corner found the head of Sheringham, who nodded the ball down across the face of goal to where Solskjær, reacting quickly, stuck out his boot and poked the ball into the roof of the Bayern net. Matthäus` departure had ultimately sunk Bayern, and Hitzfelt was blamed, but United`s never say die attitude had won through for them again and the European Cup was theirs for only the second time in the club`s history since Benfica were beaten, 4-1, at London`s Wembley stadium in 1968. Although success in the F.A. Cup Final of 2016 seems like small potatoes in comparison, the modern soccer methodology of a large squad to pick a winning combination from was as much in evidence as it was when Ferguson`s team succeeded in the league, F.A. Cup, and European cup treble of 1999. 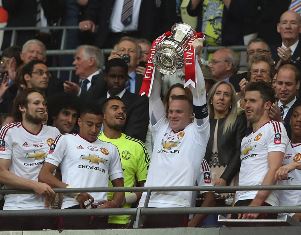 The Manchester United squad that won the European Cup in 1968 contained only fifteen players to make more than 10 starts that season; `keeper Alex Stepney (41), full backs Shay Brennan (13), Francis Burns (36) and Tony Dunne (37); midfielders Pat Crerand (41), John Fitzpatrick (14) and Bobby Charlton (41); center backs Bill Foulkes (24), David Sadler (40) and Nobby Stiles (20); wingers John Aston, Jr. (34) and George Best (41); and forwards Brian Kidd (38) and Denis Law (23). Consequently, due to necessity United can be said to have used only four players in 1968, apart from their first choice starting eleven, because of injury to prolific striker, Denis Law, that is, the European Cup was won with a twelve man squad, whereas Ferguson`s squad contained 18 players to start more than 10 games, and Sheringham and Solskjaer, the heroes of the Nou Camp, weren`t among them. Even though Solskjaer scored 12 goals that season, he started 9 and was sub in 10, while Sheringham, who scored the opening goal in the 11th minute in the F.A. Cup Final defeat of Newcastle, 2-0, started 7 and was sub in 10. Consequently, Ferguson`s treble success was based on a much larger pool of established stars (20) than Sir Matt Busby`s 1968 squad, a formula United continued to apply in the aftermath of the retirement of Ferguson, and which bore fruit for Dutch manager, Louis Van Gaal, in the F.A. Cup Final defeat of Crystal Palace, 2-1, in 2016. What that proved was that a team that wasn`t established could win a major trophy, because the club had a squad that was strong enough to survive rotation with success. 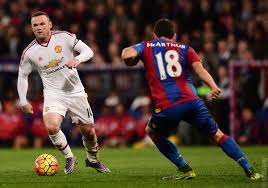 Surviving squad rotation with success was what Sir Alex Ferguson had planned for after his retirement as the most successful manager United ever had. In his last season before Everton manager, David Moyes, was appointed largely on the strength of being able to keep Everton in the Premier League for 11 seasons, Ferguson won the title with a rotating squad strength of 18 players who started more than 10 games; and central England midfielder, Paul Scholes, coaxed out of premature retirement for 8 starts and 8 substitute appearances, while Mexico`s Javier Hernández, in the tradition of Sheringham and Solskjaer, was third top scorer, after Robin Van Persie (26) and Wayne Rooney (12), with 10 goals from only 9 starts. The players who started more than 10 games were; `keeper David De Gea (28); full backs Rafael (27) and Patrice Evra (34);  center backs Rio Ferdinand (26), Jonny Evans (21), Nemanja Vidić (18), Phil Jones (13) and Chris Smalling (10); wingers Antonio Valencia (24), Ashley Young (17) and Ryan Giggs (12); midfielders; Michael Carrick (34), Tom Cleverley (18) and Shinji Kagawa (17); and forwards Robin van Persie (35), Wayne Rooney (22) and Danny Welbeck (13). Five of those players were in the team that beat Crystal Palace, 2-1, in the F.A. Cup Final of 2016; De Gea, Valencia (playing right back), Smalling (sent off in the 105th minute), Carrick, and Rooney. Two more were among the substitutes; utility defender Phil Jones, and left winger, Ashley Young, who came on for injured striker, Marcus Rashford, in the 72nd minute. Jessie Lingard, who`d substituted for the scorer of the 81st minute first goal for United, Spain`s Juan Mata, and became the winning goalscorer in the 110th minute, with a powerful volley from inside the area to the top left corner of the net, had been signed by Ferguson at 7 years of age, and had played on the left wing in the side that won the F.A. Youth Cup in 2011; 6-3 on aggregate; 2-2, and 4-1. 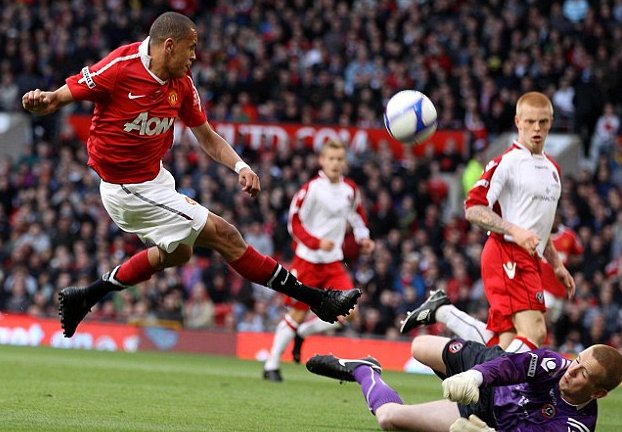 Ferguson`s modern model of building an in depth squad to survive the rigors of changes in manager as well as the vicissitudes of fate and an ageing team had succeeded. Although Moyes and his successor, Dutchman Louis Van Gaal, bought well, and promoted youth when necessary, it was Ferguson`s plan that won for United. In what turned out to be Gaal`s final season before the much heralded arrival of Portugal`s Jose Mourinho as manager, Gaal used 16 players with more than 10 starts to their names, and Ferguson`s Ecuadorian buy for the start of the 2009-10 season, right winger Antonio Valencia, who came from Wigan for £16 million, made the Final line up in the wing back position, with only 8 starts in 2015-16. The players making more than 10 starts were; `keeper De Gea; full backs Matteo Darmian (24) and Marcos Rojo (15); center backs Chris Smalling (35) and Daley Blind (35); wingers Memphis Depay (16), Jesse Lingard (19) and Ashley Young (11); midfielders Juan Mata (34), Morgan Schneiderlin (25), Michael Carrick (22), Ander Herrera (17), Bastian Schweinsteiger (13) and Marouane Fellaini (12); and forwards Anthony Martial (29), Wayne Rooney (27) and Marcus Rashford (11). Of those 17 players, 7 were Ferguson`s, and his formula of a squad strong in depth, with flexibility enough to admit of a few mistakes, was a proven success: United had survived to triumph.

Red Of Heaven 0036705182849 dularobin@gmail.com
© 2013 All rights reserved.
Create a website for freeWebnode
Webnode, an innovative sitebuilder
Have a captivating website for free!
Get started