When David Moyes arrived from Everton to manage Manchester United for the 2013-14 season after Alex Ferguson’s retirement, it puzzled many because Moyes’ only success at ’The Toffees’ had been in avoiding relegation. His only chance at silverware was the League Cup that 2013-14 season, after the 2013 traditional Charity Shield Final between the champions and the winners of the FA Cup. Dutch center forward Robin Van Persie had struck in the 6th minute with a header from French full back Patrice Evra’s clipped cross from wide on the left, which found Persie right of the ’keeper’s penalty area, and he directed a powerful looping header into the top left corner. Persie’s second came in the 59th minute when his shot from wide on the right, and well outside of Wigan ’keeper Scott Carson’s area, was deflected by Wigan center back, James Perch, into the net, which gave champions’ United the victory, 2-0. 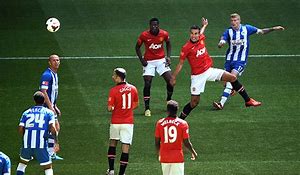 Persie went on to get 12 league goals that season, and striking partner, England’s Wayne Rooney, would get 17. Their rivals for the striking roles were Mexico’s Javier Hernández and England’s Danny Welbeck, who was on 8 goals for the season before the League Cup semi-final second-leg with Sunderland at Old Trafford. United had narrowly lost the away leg at ’the Stadium of Light’, 1-2. United’s legendary Welsh left winger, Ryan Giggs, then playing in a central midfield role, had put through his own goal  in the 47th minute before half time, 0-1, and despite an equalizing headed goal from Serbia’s Nemanja Vidić on 52 minutes, 1-1, Sunderland were awarded a penalty when England midfielder, Tom Cleverley, clumsily brought down right-winger, Adam Johnson, in the 64th minute and Italian forward, Fabio Borini, on loan from Liverpool, scored from the spot kick, 1-2. The failure of lone striker, Danny Welbeck, to make an impression, should have been warning enough for Moyes, but Ferguson’s policy of fielding a reserve team in League Cup games had obscured Moyes’ sense, and Persie and Rooney weren’t even on the bench for the second leg. Hernández, who would end the season on only 4 league goals, had been brought on in the 87th minute at ’the Stadium of Light’, and would keep his place in the team for the return leg. 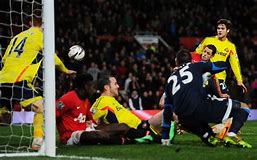 Giggs had hit the Sunderland bar from long range early on in the first leg at the ’Stadium of Light’, while Belgium’s United midfielder, 18 years old Adnan Januzaj, had a goal ruled out as Giggs’ elderly 40 years old legs were too slow to take him out of his offside position, so both Giggs and Cleverley were punished by being ’benched’ for their mistakes. Giggs had been attempting to prevent Sunderland’s Scots’ right back, Phil Bardsley, from finishing at close range, after England midfielder, Michael Carrick, failed to head clear from a free kick. Sunderland’s Scots’ center forward, Steven Fletcher, drove in a cross with his left foot at the far post towards Bardsley coming in on the right, and Giggs could only help the ball into the net by ’keeper De Gea’s right post.

Again in the second leg at ’the Theater of Dreams’, Manchester, it was a center back, this time England’s Jonny Evans, playing alongside England’s Chris Smalling in the absence of Serbia’s Vidić, who gave United their chance. Evans’ header inside the left upright after a flick on from Welbeck at the center of the goal area from a corner on the right in the 37th minute made it 1-0 to ’the Reds’ at half-time, and it remained 1-0 until full-time, which by the rules of the competition meant 2-2 on aggregate, and a period of added extra time to decide which team would progress to the Final. Phil Bardsley scored from a right foot shot in the 119th minute when, going down on one knee and literally stooping to collect it, a tired De Gea somehow managed to fumble, scooping it to his right and into the net. However, in the 121st minute Adnan Januzaj played a one-two with United center back, Chris Smalling, on the edge of the S’land area. With his back to goal, Smalling sent the ball to his right, which allowed Januzaj to run at the S’land defense and cross left footed for Hernández to slot the ball in at the far right post past Italian ’keeper, Vito Mannone, 3-3 (aet) on aggregate. 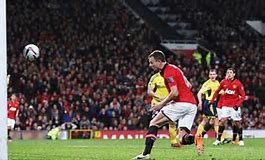 Goals were sparse in the subsequent penalty shoot-out. After S’land’s first from English midfielder, Craig Gardner, went over the bar, Welbeck blasted high, wide and to the right for United. Dea Gea saved his blushes diving to the right to save from S’land center forward, Steven Fletcher, while United’s Darren Fletcher made it 1-0 with a low shot to the ’keeper’s right. However, S’land’s succeeding penalty to De Gea’s left was an unstoppably accurate strike from Spanish left full back, Marcos Alonso, 1-1. Januzaj’s low shot to the S’land keeper’s right was too soft. Vito Mannone scooped it up easily. S’land’s central midfielder, South Korea’s Ki Sung-Yueng, sent De Gea the wrong way; slotting the ball to the United ’keeper’s left, 1-2. United’s utility defender, and hard man in midfield, Phil Jones, ballooned his effort over the bar and, after De Gea saved from English winger, Adam Johnson, going to his right, it was left to Brazil’s right full back, Rafael Da Silva, to effectively end Moyes’ reign as United manager when his low drive was saved by Mannone diving to his right. 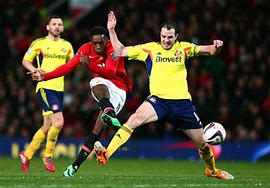 England center forward and record scorer, Wayne Rooney, would get another 8 goals that season, while Robin Van Persie, his also reliable striking partner, would net another 5 goals. Danny Welbeck, however, who’d been on 8 league goals for the season before the January 22, 2014, League Cup semi final second leg at Old Trafford against Sunderland, would score just once more before season’s end when he got the third in the 82nd minute of a 3-0 win at West Bromwich Albion on March 8, 2014. Javier Hernández would return only 4 league goals for the season; the winner on 80 minutes in a 3-2 win over Stoke City at home on October 26, 2013; the only United goal on 78 minutes in a 1-3 defeat at Chelsea on January 19, 2014, a couple of days before the League Cup semi-final defeat to S’land at Old Trafford; the fourth on 91 minutes in a home win over Aston Villa on March 29, 2014, and the third goal on 64 minutes during a 4-0 defeat of Newcastle away on April 5, 2014, at St James’ Park. Two of Hernández’s 4 goals in the league that season were after the League Cup semi-final defeat at ’the Theater of Dreams’, which raised some doubts as to the wisdom of Moyes’ selecting him, and Welbeck, given the fact that the United manager lost his job for being unable to put silverware in United’s trophy cabinet. 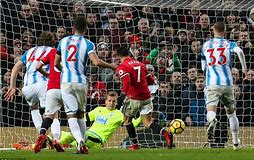 Manchester United finished 7th in the league in 2013-14, and persevering with Hernández, who made 18 appearances as substitute with only 6 starts, and Welbeck, who made 15 starts and 10 as sub, for a paltry 9 goals, his highest return in a career at United that lasted three full seasons (2011-12, 2012-13, and 2013-14) was a mistake. Welbeck was sold to Arsenal for £ 16 million by manager, Louis Van Gaal, brought to replace Moyes after his successes with the Dutch national side at the 2014 World Cup Finals, although in five seasons at Arsenal Welbeck didn’t score more than 5 league goals (2017-18) in a campaign. Hernández was loaned to Real Madrid of Spain where he made 23 appearances for 7 goals before eventually being sold by Van Gaal to Germany’s Bayer Leverkusen for £ 7. 3 million. 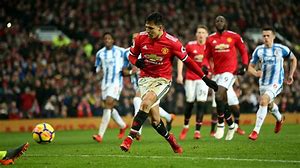 Van Gaal’s United won the FA Cup against Crystal Palace in 2016, 2-1, with Wayne Rooney as captain, and Welbeck was Arsenal’s center forward in their 2-1 FA Cup Final defeat of Chelsea in 2017, although he was taken off on 78 minutes with the scores level at 1-1 after Chelsea’s Spanish center forward, Diego Costa, scored on 76 minutes. Controlling the ball on his chest in the Arsenal penalty area, before shooting with his right foot, Costa equalized Chilean forward Alexis Sánchez strike on 4 minutes. Sánchez would be taken to Old Trafford on January 22, 2018, by Gaal’s replacement for the commencement of the 2016-17 campaign, Portuguese manager, Jose Mourinho. For what was to be a winning Arsenal  side in the 2017 FA Cup Final, Sánchez scored from six yards out from his right boot as Chelsea ’keeper, Belgian’s Thibaut Courtois, advanced, and Arsenal’s Welsh  central midfielder, Aaron Ramsey, on 79 minutes headed in French forward Olivier Giroud’s cross on the left from six yards out, 2-1. Mourinho went on to win the Europa Cup, and the League Cup in 2016-2017. However, he was replaced as United’s manager, after losing the 2018 FA Cup Final, 0-1, to a penalty from Chelsea’s Eden Hazard. Sánchez, who’d scored only 2 league goals in 12 appearances in 2017-18, and only 1, the third on 90 minutes in a 3-2 defeat of Newcastle at home on October 6, 2018, before Mourinho’s sacking, looked a good replacement for Welbeck.