Because Real Madrid won the inaugural European Cup in 1956, and consecutively thereafter in 1957, 1958, 1959, and 1960, English clubs believed that the wresting of the European Cup from the Spanish giant was the aim of their soccer campaigning. When the Manchester United squad`s plane, which was returning from qualifying for the European Cup semi-final after a 3-3 draw against Red Star in Belgrade, crashed in the snow at Munich airport, it cost the lives of England`s left back and captain, Roger Byrne, and his understudy, Geoff Bent; center half Mark Jones; midfielder Eddie Colman; skillful goalscorer, or obdurate defender, and midfield play maker, Duncan Edwards; center forward Tommy Taylor; left winger, David Pegg, and Irish forward, Liam Whelan. England`s right wing, Johnny Berry, and inside forward, or center half, Danny Blanchflower, brother of Ireland`s Jackie, who`d win the English F.A. Cup and League Championship with Spurs in 1961, never played again because of their injuries. Although a patched up team and a penalty from Ernie Taylor bought from Aston Villa to replace the irreplaceable by manager, Matt Busby, brought a 2-1 home victory against A. C. Milan of Italy at the Old Trafford stadium, Manchester United lost, 0-4, at the San Siro stadium in Milan. The club would have to wait until 1968 before making the Final against Portugal`s Benfica. Munich survivor, Bobby Charlton, the former left winger, who by then was playing in the deep lying center forward role he`d made great when England won the World Cup in 1966 against Germany, 4-2, at Wembley, London, scored from a rare 53rd minute header, which was cancelled out in the 79th minute by Benfica`s right midfielder, Jamie Graça. Again the scene was set at the national Wembley stadium for an English team`s triumph, 4-1, with extra time goals in the 92nd minute from mercurial Irish wing genius, George Best, another headed goal in the 94th minute from 18 year old Brian Kidd, who was in the side for the injured goal `king` of Old Trafford, Denis Law, and a 9th minute lobbed volley from Charlton that went over the `keeper to wrest the trophy from the Europeans and into English hands for the first time when captain, Charlton, raised it aloft in London.

Although it wasn`t evident to everyone, United`s rivalry with the Spanish giant, Real Madrid, had strong historical antecedents. It was the Spanish and Portuguese conquistadores that had colonized much of the world for Spain in the 16th, 17th and 18th centuries, and had made South America a bastion of Spain`s Imperialism.  The soccer champions of South America`s individual nations competed for the Copa Libertadores, and the winners competed for the Intercontinental Cup with the winners of the European Cup, that is, the Spanish and Portuguese teams in Europe had to be beaten before the English teams could beat South America`s colonial Spanish teams, which Manchester United finally had the opportunity to do in 1968. The Argentine winners of the `cup of freedom`, the Copa Libertadores, were Estudiantes, `the students`, who played against Manchester United in the Intercontinental Cup Final, and won, 2-1, after a 1-0 home win in Buenos Aires, and a 1-1 away draw at Old Trafford, Manchester, reasserting Spanish colonial soccer`s preeminence. Marcus Conigliaro had scored the only goal of the Buenos Aires away leg with a header in the 27th minute from a corner by his striking partner, Filipe Ribaudo and right winger, Juan Ramón Verón, La Bruja, `the witch`, had tormented United by scoring the opening headed goal at Old Trafford in the 6th minute after a free-kick from defender, Raúl Madero, which had left United too much to do, 0-1. It wasn`t until very late goals from Teddy Sheringham in the 91st and Ole Gunnar Solskjaer in the 93rd minute beat Bayern Munich at Spain`s Barcelona Nou Camp stadium, 2-1, that United won the European Cup again in 1999. The German team had led since the 6th minute through a low free kick from forward, Mario Basler, which was awarded after United center back, Ronny Johnsen, brought down Carsten Jancker. With his right foot Basler bent the ball around the United wall from just outside the penalty area, and into the net beyond Danish `keeper Peter Schmeichel. United`s despair ended in a late attacking flourish of the never say die footballing style for which they are justifiably famed. United had a corner, and with little time left `keeper Schmeichel, who`d scored in similar circumstances, ventured up to Bayern's penalty area. Beckham flighted the corner in just over Schmeichel's head, and center forward, Dwight Yorke, 18 goals in the league that season, put the ball back towards the crowded area. Bayern substitute midfielder, Thorsten Fink, had been brought on by Bayern manager, Ottmar Hitzfeld, who`d receive much criticism for it, because Fink replaced sweeper Lothar Matthäus, 37 years of age, and Hitzfeld clearly felt he was a tired risk by the 80th minute, but Fink failed to clear a ball that probably wouldn`t ever have troubled Matthäus, and the ball arrived at the feet of Ryan Giggs, whose shot fortuitously found Sheringham, who latched onto it gleefully to swipe it into the bottom corner of the net with his right boot. Neither Sheringham nor Solskjaer were chosen to start against Bayern, and as Sheringham was on for left winger, Jesper Blomqvist, in the 67th minute, Solskjaer, who`d scored 12 league goals that season, replaced center forward, Andy Cole (17), in the 81st minute almost immediately after Lothar Matthäus left the fray. 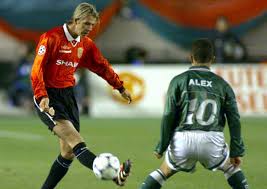 Sheringham had scored only twice in the league, but had redeemed himself by scoring with a low drive under Newcastle `keeper Steve Harper after a through ball from Scholes, in the F.A. Cup Final, which United won, 2-0, and so Sheringham had been picked to be amongst the substitutes. Within 30 seconds of the restart after Sheringham`s substitute`s strike, another Beckham corner found the head of Sheringham, who nodded the ball down across the face of goal to where Solskjær, reacting quickly, stuck out his boot and poked the ball into the roof of the Bayern net. Matthäus` departure had ultimately sunk Bayern, and Hitzfelt was blamed, but United`s never say die attitude had won through for them again and the European Cup was theirs for only the second time in the club`s history since Benfica were beaten, 4-1, at London`s Wembley stadium in 1968.  That qualified them to play against the Brazilian winners of the Copa Libertadores in the Intercontinental Cup Final, Palmeiras, which they won on neutral ground at the National Stadium, Tokyo, 1-0, after a Ryan Giggs left wing cross found captain, Roy Keane, running inexhaustibly in from his creator-destroyer midfield role to be at the far post in the 35th minute and steer the ball into the net for Manchester United to beat the Spanish in South America and become champions. 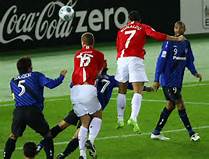 When Manchester United beat London side, Chelsea, in the Final of the European Cup at Moscow`s Luzhniki stadium in 2008, 6-5, on penalties after a 1-1 draw when a headed goal in the 26th minute from Portuguese right winger, Cristiano Ronaldo, from a left footed cross out on the right wing by Manchester United`s versatile center half playing right back on the night, Wes Brown, had been equalized in the 45th minute after a surging run and shoot from Chelsea midfielder, Frank Lampard, the club qualified for the semi-final of the World Club Cup, which had replaced the Intercontinental Cup Final between the champions of South American and Europe with a competition that included the winners of the Copa Libertadores amongst others of the world`s local best. In the 28th minute of the semi-final against Japan`s Gamba Osaka, United`s Serbian central defender, Nemanja Vidić, from a Ryan Giggs’ corner, out-jumped Gamba captain, Satoshi Yamaguchi, to power home a header past `keeper, Yosuke Fujigaya, from 12 yards, 1-0. Portuguese right winger, Cristiano Ronaldo, put United 2-0 up in first-half injury time. Again the ball came from a Giggs` corner, and again the Japanese struggled to cope with the aerial threat. Myojin was out-jumped as Ronaldo directed a powerful header past `keeper, Fujigay. United manager, Sir Alex Ferguson, didn`t bring on his star striker, England`s Wayne Rooney, until the 74th minute, but Gamba Osaka immediately pulled the score back to 2-1, courtesy of striker, Masato Yamakazi, with a shot from the right well outside the penalty area. A minute later, however, Rooney finished well, after a long ball from Scots` central midfielder, Darren Fletcher, split open the Japanese defence, 3-1. Fletcher then headed in French left back Patrice Evra`s cross, 4-1. In the 78th minute, and after linking up well with left-winger, Giggs, Rooney made it 5-1 a minute later. United conceded a penalty, 2-5, when United`s England right back, Gary Neville, was adjudged to have handled a cross from the left wing, and in the 85th minute Yasuhito Endō calmly scored from the spot, 2-5. Hideo Hashimoto scored in second half injury time in a way almost identical to Yamakazi`s first half effort, 1-2. From the right and well outside the penalty area, Hashimoto struck the ball past Dutch `keeper, Edwin Van er Sar, 3-5, but United were through to the World Club Cup Final against LDU Quito of Ecuador. 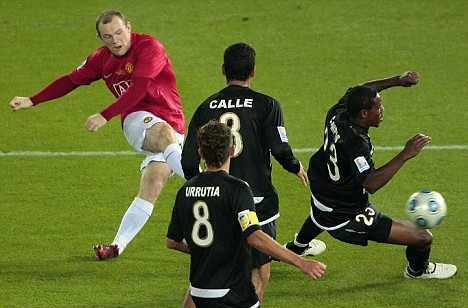 In the Final at the International Stadium Yokohama, Manchester United won, 1-0, even despite the sending off of Nemanja Vidić in the 49th minute, thanks to the clever strategic play of England center forward, Wayne Rooney who, along with the other remaining ten United players conserving their energies to cover the ground of a teammate lost, had rather waited on the edge of the box for an opportunity to come his way. At the left corner of the LDU Quito area, Wayne played the ball back to left sided Brazilian midfielder, Anderson. He then waited while Anderson played the ball into the path of England right central midfielder, Michael Carrick, in front of the LDU Quito area. Carrick pushed the ball forward to Manchester United right winger, Cristiano Ronaldo, inside the LDU Quito area with two players in attendance. With his back to the goal, Cristiano Ronaldo turned to his right and slipped the ball to Wayne, who was still waiting at the left edge of the LDU Quito area where he`d begun the play. Rooney drove a shot low and right footed into the right corner of the LDU Quito net. The goal in the 73rd minute gave the team the cushion it needed to withstand later LDU Quito pressure and win the World Club Cup for Manchester United, which gave the final lie to Spanish colonial soccer`s superiority.

Red Of Heaven 0036705182849 dularobin@gmail.com
© 2013 All rights reserved.
Make a free websiteWebnode
Website powered by Webnode
Launch your own website for free!
Start here