Old Trafford’s stadium became known as ‘the theater of Dreams’, through soccer supporters enamored of the glamour and the fame attaching itself to the swashbuckling style of what became a succession of successful teams gracing the English and world football stage after the club’s inception in 1878 as Newton Heath, ‘the heathens’. Adopting the legend, ‘red devils’ in 1902, the former ‘green and gold’ enjoyed an initial English championship triumph in 1907-08 in their new red shirts, and as Manchester United, when Sandy Turnbull, with 25 league goals, and Jimmy Turnbull with 10, were the forwards. United followed that success with victory in the FA Cup Final of 1909 against Bristol City, 1-0, when Sandy struck to put the ball past Bristol ‘keeper Harry Clay on 22 minutes after a shot by inside right, Harold Halse, hit the bar and it fell  to Turnbull to score.

Famous for flamboyance in front of goal, United were in desperate need of a striker in the early 1970s, when Brian Kidd failed to live up to expectations, after the decline of goal machine, Scot Denis Law, whose development of a long term injury, keeping him out of the United team in 1967-68, led to Kidd’s selection in the team that beat Portuguese side Benfica, 4-1, a.e.t., at Wembley stadium, London, to give United and England their first European Cup win, and Kidd a chance to shine up front as the club’s first choice striker. Injury stricken Law got 7 league goals that 1967-68 season and Kidd 15. However, a single strike from 28 starts in 1968-69, when United finished 11th in the league, and lost the European Cup semi-final to A.C. Milan, 1-2, while losing to Argentina’s Estudiantes, 1-2, over two legs, in the Intercontinental Cup Final between the holders of the European Cup and South America’s Copa Libertadores, placed a large question mark over Kidd’s ability to take on the mantle of goal scoring legend, ‘King’ Denis. 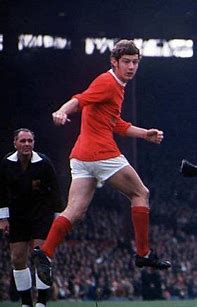 Although Kidd recovered to net 12 times the following season, Northern Ireland’s wing genius, George Best, top scored with 15, and the ageing left winger from United’s 1956-57 title triumph, Bobby Charlton, since playing as a deep lying center forward, with great success for England and United, also netted 12, which suggested Kidd had some work left to do on his finishing as a center forward, with Law making only 10 appearances that term for 2 goals. In 1970-71 Best improved with 18 league goals, and Law returned to something like his earlier form with 15, while Kidd was left to compete with future Newcastle United hero, Alan Gowling, with both hitting the back of the net on 8 occasions.  In 1971-72 Best again got 18 goals, and Law 13, while Northern Ireland’s Sammy McIlroy was beginning to emerge as a player for the future, and Ian Story Moore had arrived from Nottingham Forest as a wing complement to Best’s genius on the flanks. Although Kidd benefited from the additional assistance from Moore, who himself finished with 5 goals that season, a return of 10 still didn’t justify his being given the center forward role.

That became evident in 1972-73, when Charlton was the leading goal scorer for the club with 6, and Moore, hitting the net 5 times for United in 26 starts as a winger, finished ahead of Kidd on 4. Lou Macari, who’d been brought from Glasgow Celtic, and would boss the midfield alongside Sammy McIlroy when United beat Liverpool, 2-1, in the 1977 FA Cup Final to deny the Merseyside outfit a treble of league championship, European Cup, and FA Cup, struck on five occasions in his initial 16 starts as a striker; a goal more than Best and Willie Morgan, the Scots’ right wing, who’d captain United during their relegated Second Division Season in 1974-75, and who’d scored United’s solitary goal against Estudiantes in the 1969 Intercontinental Cup Final at Old Trafford, while Ted MacDougall, bought from Bournemouth as a striking sensation had only 5 goals to his tally in 18 starts as the team struggled to avoid the relegation that never seemed inevitable. 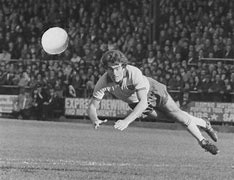 In the 1973-74 campaign the unthinkable finally happened. Although future heroes, McIlroy and Macari top scored, it was only with 6 and 5 goals respectively. Ian Storey Moore had effectively retired through injury incurred in January 1973, and Kidd made 21 starts for 2 goals only, which ultimately meant United were relegated to the Second Division at season’s end because they couldn’t score. Indeed, at one point, Alex Stepney, who’d been ‘keeper for the ’68 European Cup Final, and would be again in ’77, when Liverpool would be beaten in the FA Cup Final, was designated the team’s penalty taker by a less than confident 1973-74 strike force, and looked like he’d be the club’s top scorer after succeeding with two spot kicks. 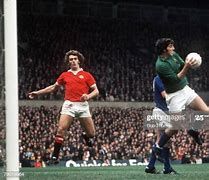 The finger was pointed at Ted MacDougall, bought by Frank O’ Farrell, former Leicester City manager, for ₤ 200, 000, as being someway responsible for United’s collapse. MacDougall had been a Liverpool player in 1964, during the period of Roger Hunt as center forward, who’d play alongside West Ham’s Geoff Hurst, in the 1966 World Cup Final at Wembley stadium, London, for England against Germany, when Hurst got a hat trick and the team won, 4-2. Consequently, MacDougall’s opportunities were limited at Liverpool, and manager Bill Shankly sold him to Fourth Division York City in 1967 for ₤ 5, 000. MacDougall scored 15 goals in his first season and 19 in his second, but York had to apply for re-election to the football league in both seasons. Was MacDougall a selfish player who sacrificed the team for his own success?

Third Division Bournemouth manager, Freddie Cox, bought  the player who’d become known there as ‘Supermac’ for ₤ 10, 000 in 1969 but, despite MacDougall’s 21 goals the club were relegated to the Fourth Division for the 1970-71 season. New manager John Bond saw MacDougall net 42 goals, including six in an FA Cup replay against Oxford United that eventually finished, 8-1, while the team finished second in the table and were promoted. In November of the 1971-72 campaign ‘Supermac’ got nine of the club’s goals in an FA Cup first round victory over Margate, 11-0, and after getting 35 goals he was on his way to Manchester United for the 1972-73 season that would be make or break for him and the club. However, Scotland manager, Tommy Docherty, had agreed to take over the ailing side in December, and his first game in charge was at home on the 23rd to see MacDougall score in a 1-1 draw with Leeds United. 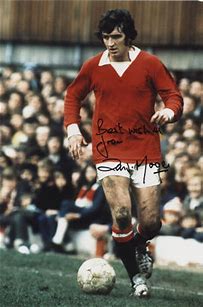 After Bobby Charlton top scored with that 6, he retired, and Denis Law was infamously given a free transfer to Manchester City, where he’d ironically back heel the ball into the net to send United down into the Second Division the following 1973-74 season. United finished in 18th place in the English First Division, and after scoring on his debut against Birmingham City in October 1972, Ted made 18 starts out of a possible 26 for 5 goals in 1972-73, before Docherty sold him to West Ham, where Ted managed to score 4 times between his first in a 2-1 win at home to Manchester City on March 17, 1973, and season’s end.

As Sammy McIlroy top scored with 6 in the 1973-74 season that saw United relegated to the Second Division, thanks to that Law heel on April 27, 1974, at Old Trafford, 0-1, Ted’s goals might have proved the difference. United finished 21st in the table, on 32 points, 3 above bottom club Norwich, and although the club won the Second Division title in 1974-75, former center forward hope, Brian Kidd, had been sold mid-season to Arsenal for ₤ 110, 000. Docherty’s purchase of center forward Stuart Pearson, from Second Division Hull City for ₤ 200, 000, would see Pearson top score with 17 goals, but it might’ve been better red with Ted.