Homepage > All Over Rash

Marcus Rashford’s meteoric rise has led to comparisons with Wayne Rooney, Michael Owen, Harry Kane, and Cristiano Ronaldo.  There are similarities with Ronaldo, the Portuguese captain and right winger, who was with Manchester United from 2003-4, after being transferred from Sporting Clube de Portugal in the close season when he’d made 25 league appearances for the Portuguese side for 3 goals. In 2003-4 Ronaldo made 29 league appearances for United and returned 4 goals, and in 2004-5 the winger made 33 league appearances for 5 goals. The last season he failed to reach double figures for United was 2005-6 when Ronaldo reached 9 goals in 33 league appearances.  Transferred to Spain’s Real Madrid for the beginning of the 2009-10 season, Cristiano achieved his career best, 48 league goals, in 2014-15. Consequently, Rashford’s early career is very similar to Ronaldo’s. Making 11 league appearances in 2015-16, Marcus scored  5 times for the reds, and in 2016-17 he scored another 5 times for the ‘red devils’  whilst appearing 32 times. During the 2017-18 season, Rashford hit the back of the net for United on 7 occasions in 35 league appearances, and by the middle of January 2019 he’d already reached 7 goals. 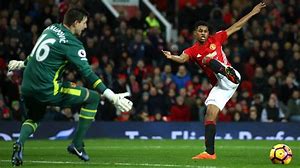 After being on loan to lower division clubs, Harry Kane’s top level career began at around the same time as Rashford’s. In 2013-14, he made 10 appearances for Tottenham Hotspur for 3 goals. However, his goals tally increased dramatically in 2014-15 when he struck 21 times in 34 league appearances, and in 2015-16 Kane made 38 appearances for 25 goals scored. 2016-17 saw Harry put the ball in the net  29 times in 30 appearances, and 30 times in 37 appearances in 2017-18, while he’d struck 14 times by the middle of January 2019, that is, twice as many strikes as Marcus Rashford, who Kane had played alongside in the England team, which lost the semi-final of the 2018 World Cup against Croatia, 1-2. Marcus had started the group game against Belgium instead of Kane, which England lost, 0-1. Among Rashford’s five further appearances as ‘sub’, he scored from the penalty spot in the shoot-out, 4-3, that ensured England progressed from the last sixteen after a 1-1 draw against Columbia. Despite his own goalscoring prowess, Kane, who was the highest individual scorer with 6 goals in the 2018 World Cup Finals, hadn’t won any major trophy with Spurs either. 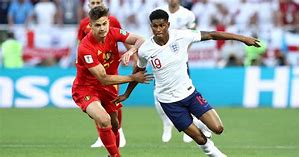 A great trophy winner was Wayne Rooney, who began at Manchester United at about the same time as Ronaldo, who alongside Rooney of course went on to win the European Cup with the club in 2008, and the World Club Cup against Peru’s LDU Quito with Rooney getting the only goal of the game. At Real Madrid, Ronaldo went on to win the European Cup again in 2014, 2016, 2017, and 2018; and the World Club Cup in 2014, 2016, and 2017. So far as goals go, Rooney’s first season in double figures came after his transfer from Everton, where he got  9 in 34 league appearances in 2003-04, to United, where he struck 11 times in 29 league appearances in 2004-05. For the next ten seasons, Wayne was never out of double figures, although it’s strange that, given United’s huge success during his period there as premier striker, in the seasons when he reached 26 (2009-10) and 27 (2011-12) goals, the club only won the League Cup in 2010 and Rooney had to come off the bench in the 42nd minute to score the 74th minute winner against Aston Villa after central midfielder, England’s James Milner, had given them the lead on 5 minutes. England’s Gabriel Agbonlahor was played in behind the United defence, and outpaced United center back Nemanja Vidić to the penalty area. The Serbian defender grabbed hold of the striker's shirt before lunging in with a clumsy challenge. Milner sent Polish ‘keeper Tomasz Kuszczak the wrong way with a side-footed finish to the bottom-right corner, 0-1. United had drawn level through Michael Owen in the 12th minute with a low right foot shot from the right. Bulgarian centre forward, Dimitar Berbatov, was brought down, and it looked as if it’d have been a penalty if the England striker hadn’t driven the loose ball to the left corner of the Villa net past the despairing dive of US ‘keeper Brad Friedel.  Rooney’s looping header over Villa ‘keeper Friedel, from a cross on the right by Ecuador’s Antonio Valencia, made it 2-1. 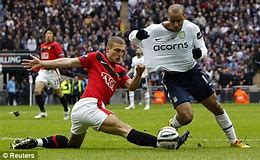 United’s relative lack of success in those seasons demonstrated the value of a second striker to complement the main spearhead of the team.  Apart from the European Cup and World Club Cup, Rooney played in five championship winning seasons at United; 2006-07, 2007-08, 2008-09, 2010-11, and 2012-13. Towards the end of manager Alex Ferguson’s career, another luminous teenager in the red shirt appeared briefly. Danny Welbeck who, despite making 27 league appearances as a centre forward, for only a single goal returned, captured a title winners’ medal in 2012-13. However, the previous season, 2011-12, Danny had scored 9 league goals in 30 appearances as City won the title on 89 points by virtue of having scored more goals. Consequently, when Danny returned 9 goals in 25 appearances in 2013-14 and United finished 7th, Welbeck was on his way to Arsenal. In short, comparisons with Welbeck are more relevant in Rashford’s case, who hasn’t yet reached Welbeck’s highest season’s tally at United, 9. 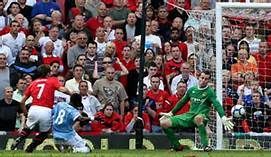 Michael Owen’s own career at United looks good, and closer scrutiny reveals that his 19 appearances for 3 goals in 2009-10, which resulted in his League Cup Final winners’ medal, and his 11 appearances in 2010-11 for 2 goals that got him a title winners’ medal, aren’t stats so dissimilar from Rashford’s. Of course, Owen had won the Europa Cup and the European Super Cup with Liverpool in 2001, a season in which he got 16 goals, and Michael was never below 11 for the seven full seasons he played for the Anfield outfit from 1997-8, before his transfer to Real Madrid for the 2004-5 season. Owen left for Stoke’s 2012-13 season after making just one appearance for United in 2011-12 and, as Wayne Rooney’s star too dimmed at Old Trafford in 2016-17, where he scored just 5 league goals in 25 appearances, which was slightly worse than the previous 2015-16 season when he returned 8 league goals in 28 appearances , it was hoped Rashford’s would brighten. Both Rooney and Rashford played in the 2016 FA Cup Final win over Crystal Palace, 2-1, and a year later, with both players on the substitutes’ bench, Rashford came on against Sunderland in the 2017 League Cup Final in the 77th minute for England winger, Jessie Lingard, who’d gotten United’s second in the 38th minute of a 3-2 win. It was that same season that Ajax of Amsterdam were dispatched, 2-0, in the Europa Cup Final. Rooney came on to say goodbye in the 90th minute, before returning in 2017-18 to Everton, the club United had paid £25.6 m for, and where he'd returned 6 goals in 33 league appearances in his debut season of 2002-03 for 'The Toffees', while Rashford played until the 84th minute when he was replaced by France’s striker, Anthony Martial. It was a great start for Rashford: three major trophies in two seasons. However, strikers have to score or they don’t make it at Manchester United. C’est la vie! Martial scored 11 times in his first season, 2015-16, and Rashford’s yet to make double figures: pressure could tell.